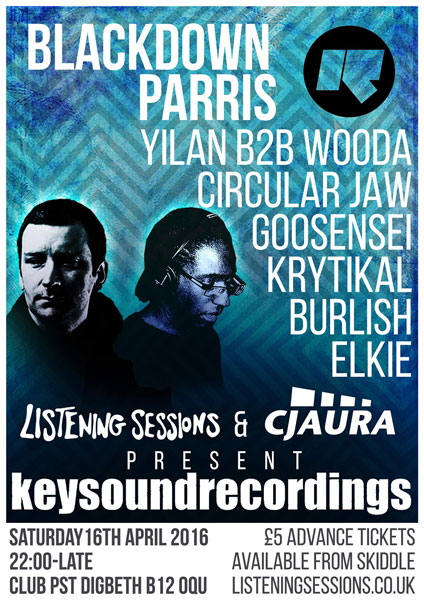 With each of our LIVE events we like to connect the dots through the spectrum of underground electronic music and this night is going to be a ride from start to finish. If you have had your ear to the pulse of the UK underground bass music scene over the last 10 years you will have heard of Keysound Recordings and the driving force behind the label, Blackdown.

Blackdown is a true supporter of a number of tracks coming out of the Listening Sessions / Circular Jaw camps through his radio show on Rinse.fm. It is with great pleasure we can bring him to Birmingham so he can give us a taste of what is bubbling in the dark corners of the UK underground sound.

Parris is better known as a behind-the-scenes guy. He runs the Soundman Chronicles label, which spun out of Keysound’s moody orbit and has released young British producers like Wen and Etch. He worked for Soho’s Black Market Records for several years, and is involved with Tempa, a logical fit given that his favoured music views current styles through the smoky lens of golden-era dubstep. Playing a 90 minute set, expect to be taken on a journey!

Next up we have Yilan & Wooda. These two have been part of the Listening Sessions movement from the beginning and we are extremely proud to be able to have their music featured in our first release as a label later this year. With roots in Techno, Dubstep and styles that have no name, its going to get dark!

£5 in advance and more on the door – tickets are available from Skiddle HERE!