Chameleon audio bossman and grime don Mojoe steps outside of his comfort zone for a release on Rawtrachs’ Alternative Architecture imprint.

It’s been great to see the progression of the Futurepast Zine offshoot label Alternative Architecture recently. The relentless release schedule and roster predominantly comprising of artists that pass through our Thursday showcase events is great to see – especially as the quality of the music has been consistently high. 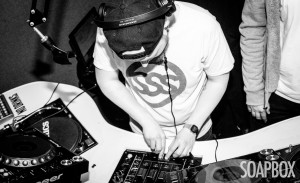 One theme that seems to run through all of the Alternative Architecture back catalogue is the feeling of pushing the boundaries of what’s expected – there’s a lot of material that hovers between genres and borrows elements from different sonic palettes in order to create something larger than the sum of its parts. It’s this that makes the label quite hard to pinpoint or put any real labels on, apart from “electronic” and “awesome”.  It’s great to hear how Mojoe (long-time grime producer and label bossman) has embraced this philosophy and created something that both sits far away from his normal body of work and yet still echoes back to it in an almost retrospective way.

Opening the EP with the dreamy Yatta, spacey pads sit under a synthetic flute that make way for some grime staples: Mojoe’s familiar producer tag and grime infused percussion – rolling hats and sporadic snappy snare patterns keep the vibe alive and remind us of the producer’s roots. Eerie atmospherics and a low-slung 808 round out the package and complete the smoked out feel.

Moving on to the second track of the release, Wensleydale offers something a little more upbeat but also more detached from Mojoe’s usual sound. Borrowing aesthetics from the sort of stuff you’d hear on the early Autonomic podcasts,  the track is a synth laden exploration powered along by classic drum machines on an off-kilter pattern that feels really mature and progressive. Sitting somewhere between synthwave, 80’s electro and the more left of centre drum and bass/170, this is a personal favourite – my only criticism of this one is I wish it was longer!

the closing track of the release, 745, is probably the closest to what we have come to expect from Mojoe and also (perhaps unsurprisingly) the most dancefloor-oriented. That’s not to say this tune carries any less depth than the others though – just that the bass pumps just hard enough for this tune to be equally at home in the club or at home on a meditative tip.

The EP was released on 28th April, so you can grab it right now from Bandcamp!