Release: The Light of Day [Out now on Futurepast Zine] 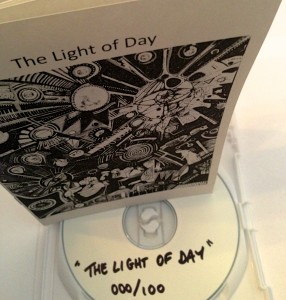 The first release to be featured is the “The Light of Day” compilation! It has just been released by Futurepast Zine in the form of a CD and accompanying zine. This release is something special! With 7 out of 9 sonic contributors being Listening Sessions regulars and limited to 100 copies, we can’t recommend getting yourself a copy enough!  Here is a Q & A with Futurepast Zine founder, Rawtrachs!

Q. What inspired you to start Futurepast  Zine ?

A.  When I was a kid I was into buying records and I loved getting magazines like ‘Musik’, ‘Dj’, ‘Eternity’, ‘Wax’, ‘Generator’, etc… I loved how they ran features and interviewed my heroes. Some peeps may remember Knowledge mag, originally that was a free mag and it was A6. So that and people like Don Letts with that DIY punk attitude provided me with the motivation. Also, I’m sick of being force fed the same old drivel that certain publications put out, and I wanted to do something from the heart, something I was passionate about that makes me want to pick up a pen and write something. It’s like a transformation of energy: hearing vibes and then doing something with that sonic energy, so someone can read it and then take it from there… the energy moves on in a different form.

Q. How many editions have you done and how do you choose what features in the different editions?

A. 6 issues so far, over about 3 years. It’s a pretty organic and natural process. For instance at [email protected] I met the Rawganics guys and was interested to find out more so it turned into a feature about there label. If the zine contributors or me feel 100% strongly about some music/artist/label, it goes in. Nothing less will do. Some of the interviewees approach the zine out of interest to find out more and it just so happens that I’m berserk about their music. The zine is more about the timeless side of music than the trends. The zine favours passion and sincerity over the use of big words and fashion. I do like to have wicked artwork to go with it where possible, such as that provided by artists like Goosensei and Bears Art. 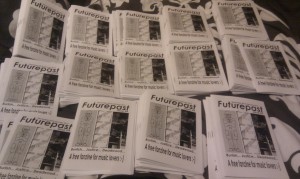 Q. Can you please tell me more about the upcoming edition and the idea behind The Light of Day compilation  and when will it be released and where can we get a copy?

A. The Light of Day idea came about because I was hearing music from peeps I linked with at Movement. One day I stuck their tracks on a CD for my car, the music I heard was wicked and I felt like something had to be documented. Their music and what they were about resonated with me. At the same time I’m a fan of Axis records and Underground Resistance. They have interesting concepts. I always wanted to release something which was about a concept and so I approached the artists I met. I was really influenced by a compilation released by Abdul Haqq called ‘Technonomicron’. Also hearing music and meeting people at Listening [email protected] was an inspiration.

Q. Along side creating Futurepast you also produce and DJ ? Can you tell me a little about your production style and any releases you have had and where I can check them out ?

A. I’m always messing about with music, but I like to just feel my way with it really. I’m not too bothered about it. I’m into making raw music (hence the name ‘Rawtrachs’). I love the aesthetics of hardcore, jungle. The music is rough. I love breakbeats because they sound real and not some over eq’d clean as f**k drum sound (though that can be cool sometimes). I did a couple of tapes the past couple years and had support from Modern Urban Jazz (MJAZZ), they re-did a tape of mine and also used one of my tracks for their Modernists 4 album. I’m more of a selector than a dj, I like to play a mix of genres. My roots are jungle, and at its peak it incorporated all music styles, be it classical, reggae, hip hop, techno, house, jazz etc… so I think that’s why I like to play a range of music. Even cheesy shit, within reason 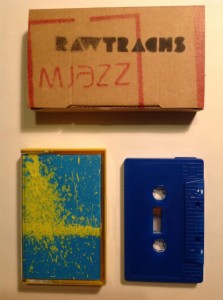 Q. What can we expect in the future from Futuepast?

A. I really want to help Futurepast to evolve and grow. It’s important for the zine to be its own entity and not about me or the contributers.

There’s some great contributers that help to keep the zine fresh so it would be nice to get more from them. I’ve got a couple of ideas for issue 7, but I need to test them with the team and see what they think too. Some articles/interviews just naturally die or fizzle out which is cool – survival of the fittest! There’s always lots of ideas to be honest and there will definitely be another kickstarter project. The main thing at the moment is ‘The Light of Day’ cd. It’s an amazing body of work that I’m really proud to present. Its now available on bandcamp http://futurepastzine.bandcamp.com/album/the-light-of-day and a few shops. Best thing is to check Facebook and Twitter (facebook.com/futurepastzine & @futurepastzine) or just Google it

With this release there is music, artwork and a zine. So something to read and look at while you listen to the music. I hope its a fulfilling experience for whoever checks it out. The artists involved are amazing and have gone out their way to do something regardless of the reward. I think it shows how dedicated they are to their craft and the trust they have in Futurepast zine which I really appreciate. They are Anjin, Betamax Heard, Bear Art, Burlish, Goosensei, Hollow, Kouben, Krytikal, Ste Shine and me.

There’s so many things to push the music, for instance the Goosensei YouTube video with the triangles (search Goosensei on YouTube). It’s amazing and it would be great to explore those ideas and perhaps document it in someway. When I watch that video its like an amazing piece of art to me. It excites me and I want to find out more about it. I wonder if it could be pushed more and what type of context would different people appreciate that.

Respect to all contributers and supporters of Futurepast zine. It’s easy to give up on it at times but when people want to get involved and show some love for it, it has to keep going. Also i’d like to add that the name ‘Futurepast’ was taken from a track with that name made by Nubian Mindz. That guy is a legend, and a hero of mine, a soldier. I don’t know that guy but I’m a complete freak about his music! I’m going to interview him one day! 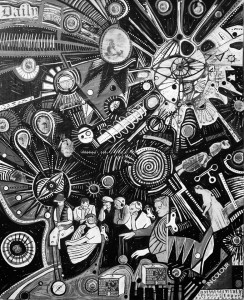 “The Light of Day” cover by Bear Art