So a few months ago as I started my Radio Documentary module at Uni, I got set an assignment with pretty free reign. Make a documentary for the radio, that’s five minutes long. As a big fan of nearly all electronic music for about the past decade I obviously wanted to focus my efforts into my passion and when I realised I’d been in Brum for 3 years with out checking out Listening Sessions, it seemed like a no brainer. I got to find out a little bit more about a night I had heard so much about and I got to immortalise my findings as a documentary that would help spread the word further, a win win situation. After a few messages to Tom (Elkie) & Mat (Goosensei), I packed up an audio recorder and a notepad and headed down to  the first showcase.

As an outsider to the event when I first attended, what first struck me was how welcoming everyone was to someone they’d never seen before. Before I even got inside those waiting outside struck up conversation with me, asking what music I was into, recommending tracks and welcoming me down to the event. I hadn’t even walked in the door yet. Once inside this reached new levels, though I was there as a documentary maker at no point did it ever feel like I was interviewing people, instead each exchange was simply a conversation between like-minded individuals. This didn’t just extend to me either, on my second visit as I waited outside for the event to open; I got chatting to Paal Singh a producer attending the event for the first time. We had a chat, discussing production in general, university, music and creativity and after going in and going our separate ways it was refreshing to bump into him later engaged deep in conversation with a big group of people, all of them loving the track he’d played and it was even more satisfying to see him the next month with a brand new track eager to jump back in. 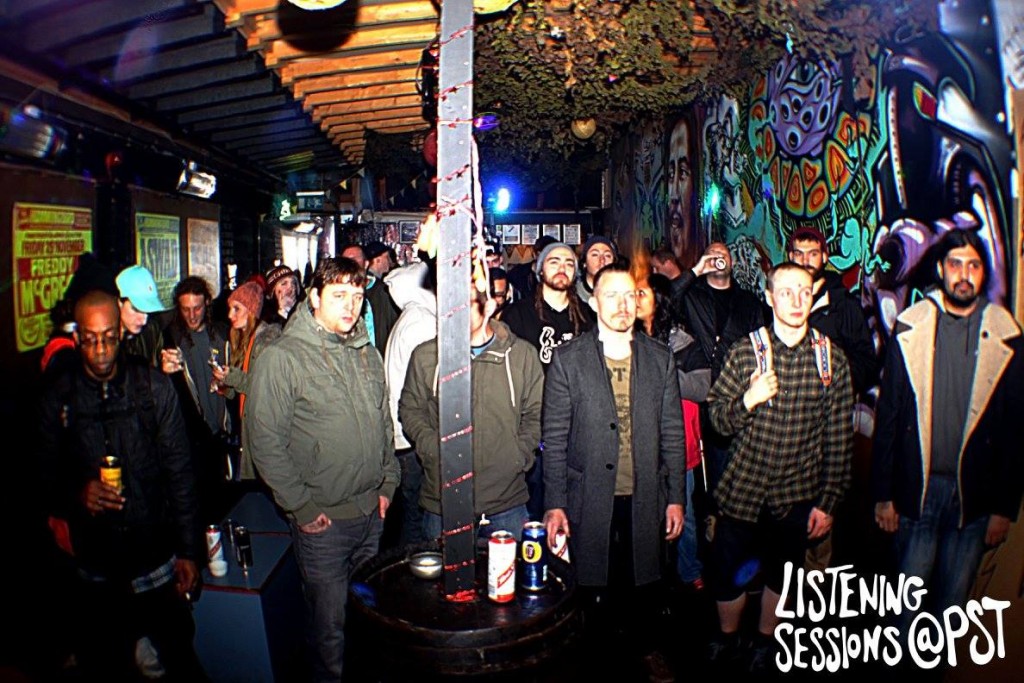 This welcoming spirit is summed up beautifully by one of Goosensei’s monologues as he waited for a producer to line up the next track: “Big up the producers, big up the listeners, it doesn’t matter what you do, you’re supporting the music and that’s what matters.

From then I realised that the only way to do this piece justice would be to let the community tell it’s story. I interviewed Elkie & Goosensei, and chatted to almost everyone who was willing to speak into my recorder and then spent the next few weeks contacting people to grab tracks I’d heard throughout the event. I then put it all together, eliminating any trace of my voice from the interviews and leaving the Listening Sessions community to tell people just what they were all about.

For anyone who hasn’t been down, hopefully this will give you a little taste of Brum’s underground music heart and will draw you into  this circle the same way it did to me, you won’t find anything quite like Listening Sessions anywhere else, so if you like the sound of it, get down to a showcase, first Thursday of every month.

Music used is all from the community – tracklist and links below.